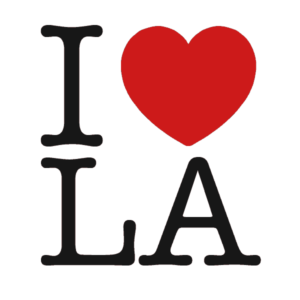 “I love LA” with enthusiasm are words not often exclaimed (or worn), and you can imagine it’s particularly shocking when they’re said by someone who doesn’t actually live in LA. It happens, but not as often as the people who live in and understand this city think it should. So why is that? What is so off-putting about this place to some people?

I started thinking about what my thoughts were about LA before ever having visited. My first trip was my senior year in high school and I remember thinking “…I have no fucking clue what to think?” I thought, “well maybe its a little dirty mixed with a little more glamour?” “There are famous people everywhere?” “Maybe I’ll hate it because everyone in San Francisco does?” Turned out I was only partially right, as I discovered shopping on Melrose for the first time. I had expected (hoped for) Paris and got an ever so slightly more confusing/dirtier version. But through the barely dressed mannequins with their creepy colored wigs and the um… lets just say unique… people crowding the Coffee Bean, I had accepted there was culture. I grew up taking Bart into San Francisco on the weekends and I had seen graffiti, walked through the Tenderloin, and avoided interactions with crazy homeless people. So in a weird way there was an underlying sense of relief that LA wasn’t all that much different than any major city in America.

The biggest problem I think visitors, even some inhabitants have is the intimidation factor. You can do the whole, “I can’t stand the traffic”, “there’s no public transportation”, or “it’s too big and spread out” blah blah blah, those are all issues and there is indeed a lot to LA. But something I found fascinating when I got to examining the truth is… the skeptics had usually mentioned they went and checked out Hollywood Blvd (EW) or something similarly as colorful and obnoxious to people who live here. And I also got the sense they thought Downtown was too [insert skeptical opinion here],  and everywhere else was everywhere else, therefore just too overwhelming. There are so many more things to see and do, why waste your time getting terrorized by fat Spiderman on Hollywood Blvd? I actually worked on Hollywood Blvd for two years, and stories from Hollywood Blvd could be a blog itself. It’d either be called “Shit You Wish You Didn’t Overhear on Hollywood Blvd” or “Shit You Wish You Hadn’t Seen on Hollywood Blvd”. Between tourists NEVER looking UP, puke, and people missing limbs I will never understand how or why people would want to visit this place. The Roosevelt, “The Saving Grace of Hollywood Blvd” as I like to call it is still worth visiting, but other than that there’s plenty of other cities and activities to entertain you.

So how do we change peoples minds? Do we, those of us who are Angeleans, care to? Well, in my experience we change peoples minds one skeptical friend at a time and it can actually be really fun. I personally have this thing about proving people wrong, I find it SO incredibly satisfying. We all love/hate it here, but as someone who has found charm and happiness in this city it bums me out when I hear people say “I hate LA”. A few years ago I probably would have accepted and perhaps agreed, but today I’m protective of this unique community. If and when you find you start loving LA, all of its nuances and seemingly pain-in-the-ass aspects become just part of the deal and perhaps even a little endearing. We here laugh in the face of traffic, we accept having to drive everywhere, but in turn we get some of the greatest restaurants, beaches, bars, music venues, weather, and oh the list goes on. There’s a lot of wonderful and unique things goin’ on around here, and the task of finding your niche is not as daunting as you think. Whether you live here or not we all had to start somewhere, and if you had the balls to visit or stay you’re up for the adventure.