The First Tale from the LA Underground : My “Only In LA Story” 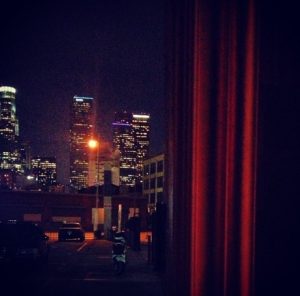 I’ve discovered living here that all of us LA residents, and even a fair amount of visitors have what I like to call an “LA Story”. Weird, crazy, awesome, ridiculous, and/or terrifying crap happens here, all day everyday, and sometimes we’re fortunate (or unfortunate) enough to run into some of these “did that really just happen” moments. Now, I’ve seen’t some things. I’ve seen people having sex while walking in a crosswalk (I’m not even going to try and explain that one), I’ve been around a celebrity or two at a bar, I’ve been harassed by a man with colored extensions, been on stage for a show, “partied” at a big house in the hills, and I’ve stumbled in to a secret warehouse party… but honestly when I think about it… the REALLY exciting stuff doesn’t really happen to me? And frankly I’m jealous of the people who have experienced these amazing or strange, “only in LA” moments.

I have this same problem with Vegas, I swear to to God, EVERYONE else I know has crazy these crazy stories, but I’ve yet to have one of these “Vegas moments”. Example: a few years ago, two of my good friends decided they would rather go to a pool party than a brunch; they ended up meeting a rich guy who just wanted to take them shopping (I was rolling my eyes at this part), and said he’d take them anywhere. So where do my gold diggin’ friends go? Victoria’s Secret. This guy spent $2000 on bras and underwear for them, then drove them back in his limo to our hotel, dropped them off, and… that was it? …Why? Why didn’t I go to this pool party? Why wasn’t I there to say “you idiots we’re not going to Victoria’s Secret we’re going to Louboutin”? Anyway, point is I’m rarely in a position to experience these crazy, unique tales, but apparently everyone else is so I’m looking forward to featuring some Los Angelean’s and their “Tales from the LA Underground”. None the less, I’ll do my best to start us off with one of my favorite memories, and it was actually one of my first Los Angeles experiences.

I was still in college working at the House of Blues in Anaheim where I met my now best friend Michelle. Michelle is one of those people… that somehow knows everyone. And damn her she’s likable and charming so people invite her places. It’s always been an adventure with Michelle and this night was no exception. She’d been invited to “The Battle At The Berrics” in downtown LA…. first of all I’d never been downtown at this point, and I had no clue what the “Berrics” was I just knew it had something to do with skateboarding. We show up to a row of warehouses in what seemed like the middle of nowhere, and my first words as we searched for this “Battle At The Berrics” were “oh hell no.” There was no one around… no one hanging out outside… it was dark, and creepy… but at last Michelle’s friend appeared out of nowhere and had us follow him to the most obvious entrance on the other side of the damn warehouse. Her friend introduced himself as Salman Agah, who was not only a fucking skate legend, hello, but a big chunk of the brains behind “The Berrics” opperation. I learned then that the Berrics was the indoor skate park mastermind project created by two skate legends Steve Berra and Eric Koston (Berra + Eric = Berrics, get it heh heh). Its a place where they/their friends come to skate, hang, make videos, and on occassion host a “Battle At The Berrics”; an event where just about every top notch skater comes to play S.K.A.T.E against eachother in hopes of winning the title as 1st place winner. That night surrounded by skate legends and people I admire like Jason Lee and Rob Dyrdek, I scarfed down my first In-n-Out double-double and watched Chris Cole take 1st place at the second ever BATB.

My first trip downtown I’d been to an exclusive LA event, in a warehouse, surrounded by really intimidating cool and famous people. My first trip and I’d already peaked at the coolest thing I’d get to do here! But I’m going to quit whining now, I’ve got a lotta years left on this life therefore plenty of time to maybe start trying to stay up past 10pm and start searching for new situations to find myself in. So in the meantime, you got a good “Tale From the LA Underground” to tell? Email me at caroline@loveandloathingLA.com to get your story featured. We all love a good read.

Next postGimme Plaid. Gimme ALL OF IT.