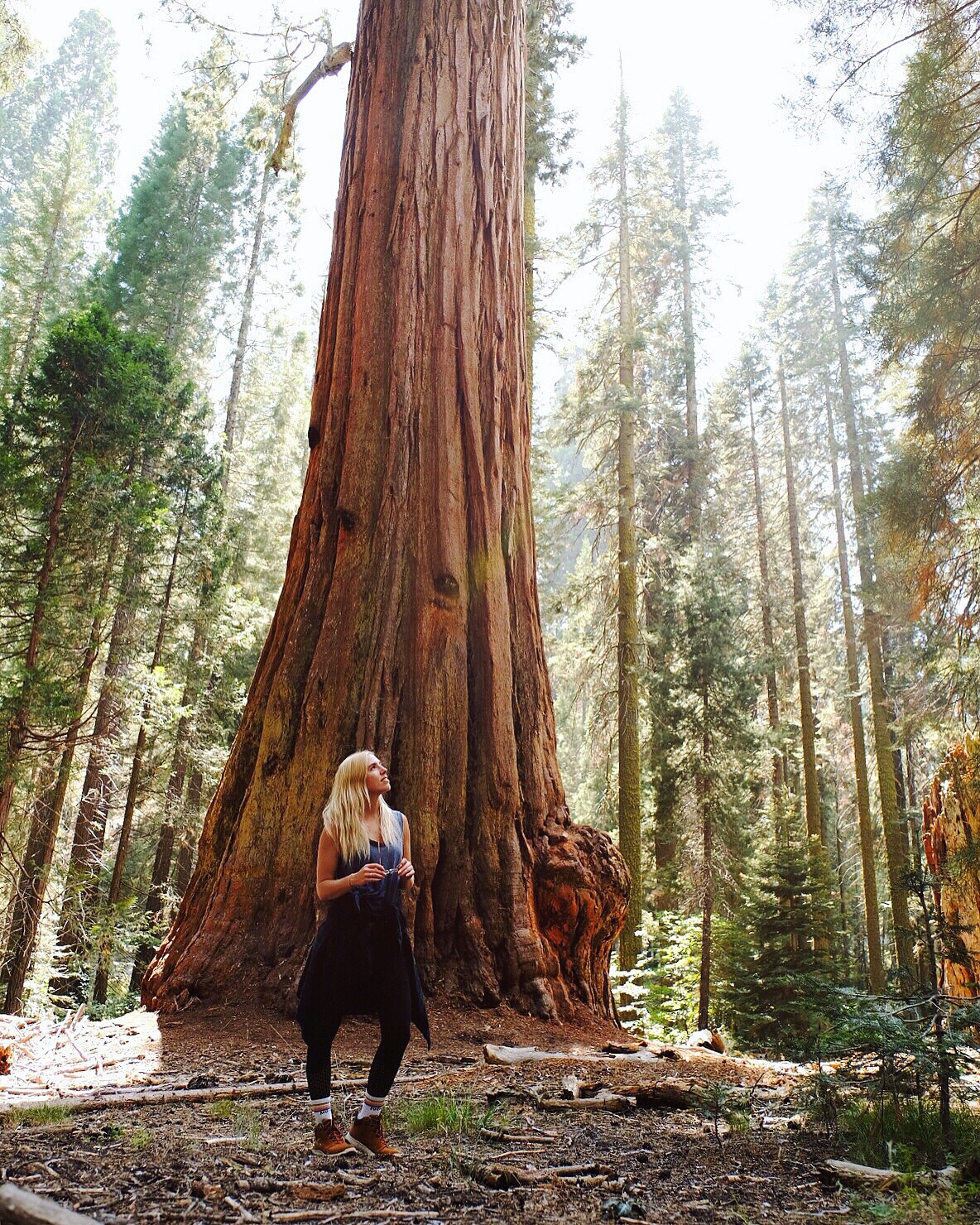 If you are the proud owner of a luggage tag that reads, “I love not camping.” the likelihood of you being the outdoorsy type is pretty slim. Well friends, as it turns out I am said owner of said luggage tag. I have simply never been one for dirt, mountain lions, bugs, granola bars, tents, and sleeping bags. I love nature, (come on of course I love nature) just typically from a distance. Preferably from the window of a nice little cozy cabin – Kidding. Kind of. Trips to places of the earth with no cell service or civilization aren’t typically my preferred method of adventuring, but in being “forced” to head to Sequoia National Forests this past weekend, I am – to my surprise – now singing a different tune.

The Sequoia National Park is located in the southern Sierra Nevada east of the San Joaquin Valley here in the beautiful state of California. I had the pleasure of visiting a few parts of the vast park during a quick weekend getaway to celebrate one of my best friend’s birthdays, and it was an experience this non-nature girl will genuinely never forget. If you’re looking to escape city life for a little relaxation mixed with a little adventure, this is the magical bucket-list place you need to visit, and this is what you need to do: 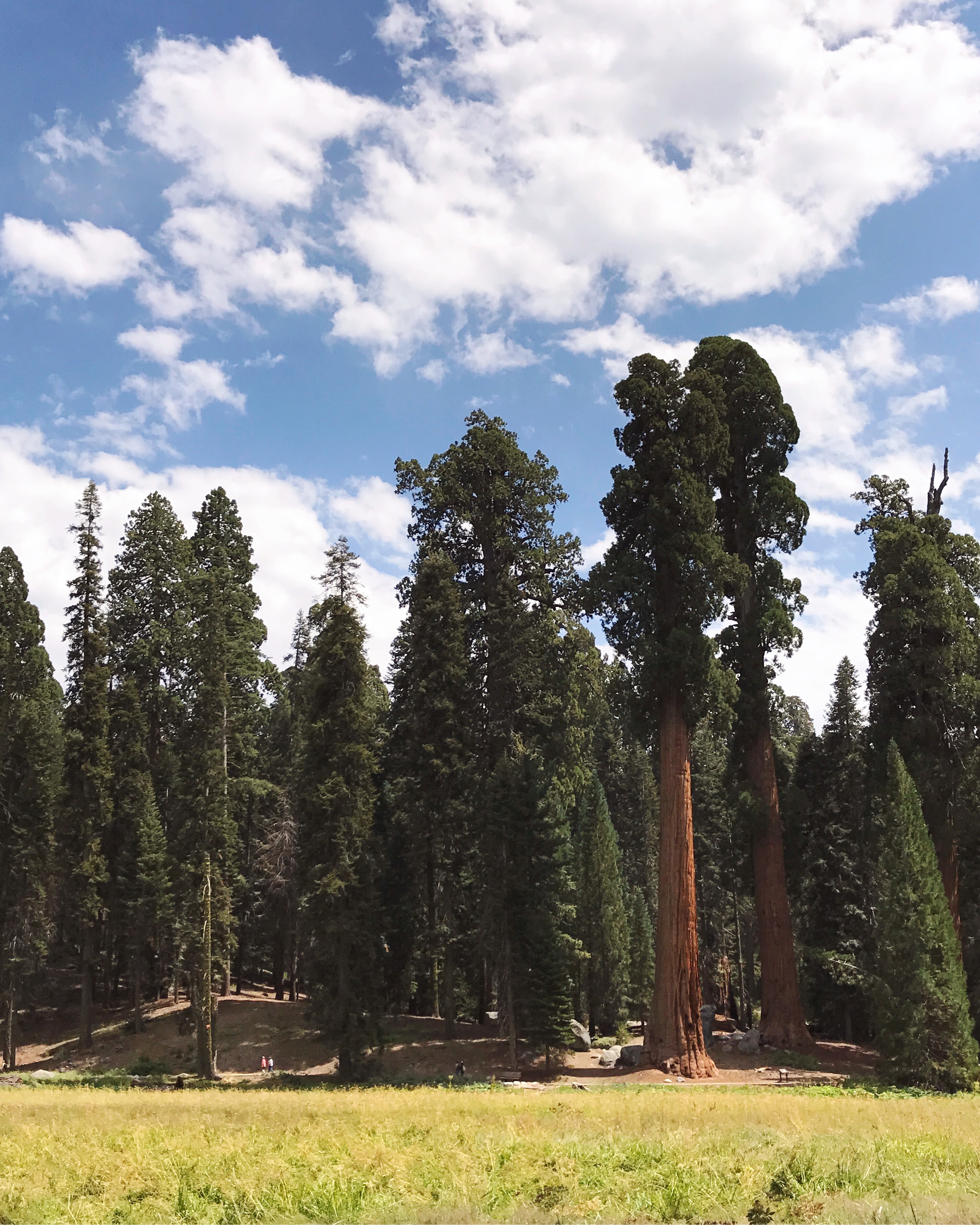 The main area of Sequoia National Park has a trail for just about everyone – everything from leisure strolls to intense obstacle courses. But the most important part about visiting this park? SEEING THE SEQUOIAS! Sequoia National Park is home to some of the most incredible sequoias, including the General Sherman tree – which casually happens to be the largest tree on earth. Just a small 275 ft tall and a 25 ft diameter.

To experience these giants at a leisurely pace, definitely walk the Big Trees Trail that loops around a beautiful meadow. General Sherman is in a separate area of the park, but only about a mile down the road. Another great attraction to see or hike to is Moro Rock which offers a breathtaking view of The Great Western Divide.

*It’s worth noting there is a shuttle that will take you straight to all of the best parts of the park! Head HERE for more info on all the happenings in the Sequoia National Park. 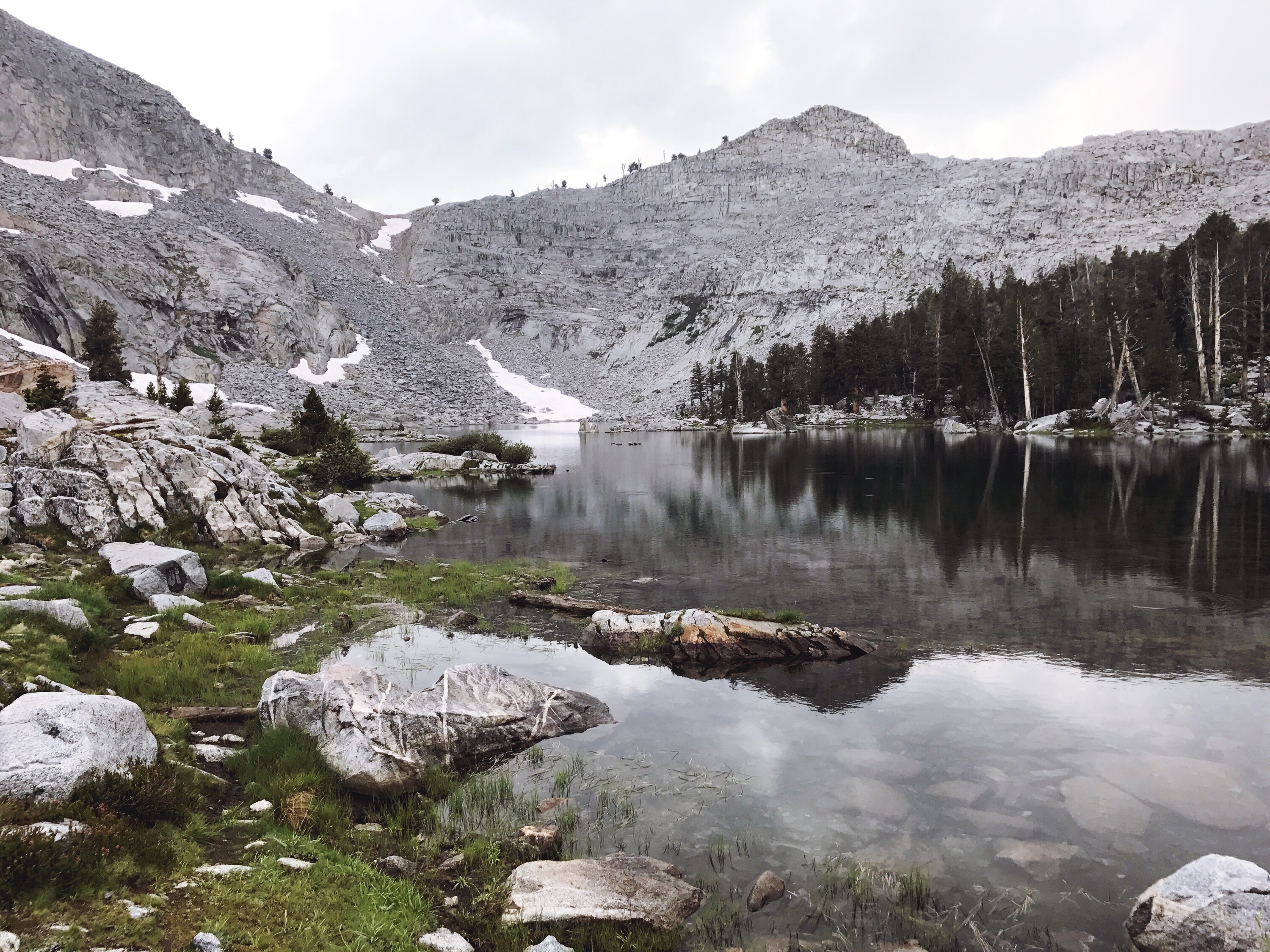 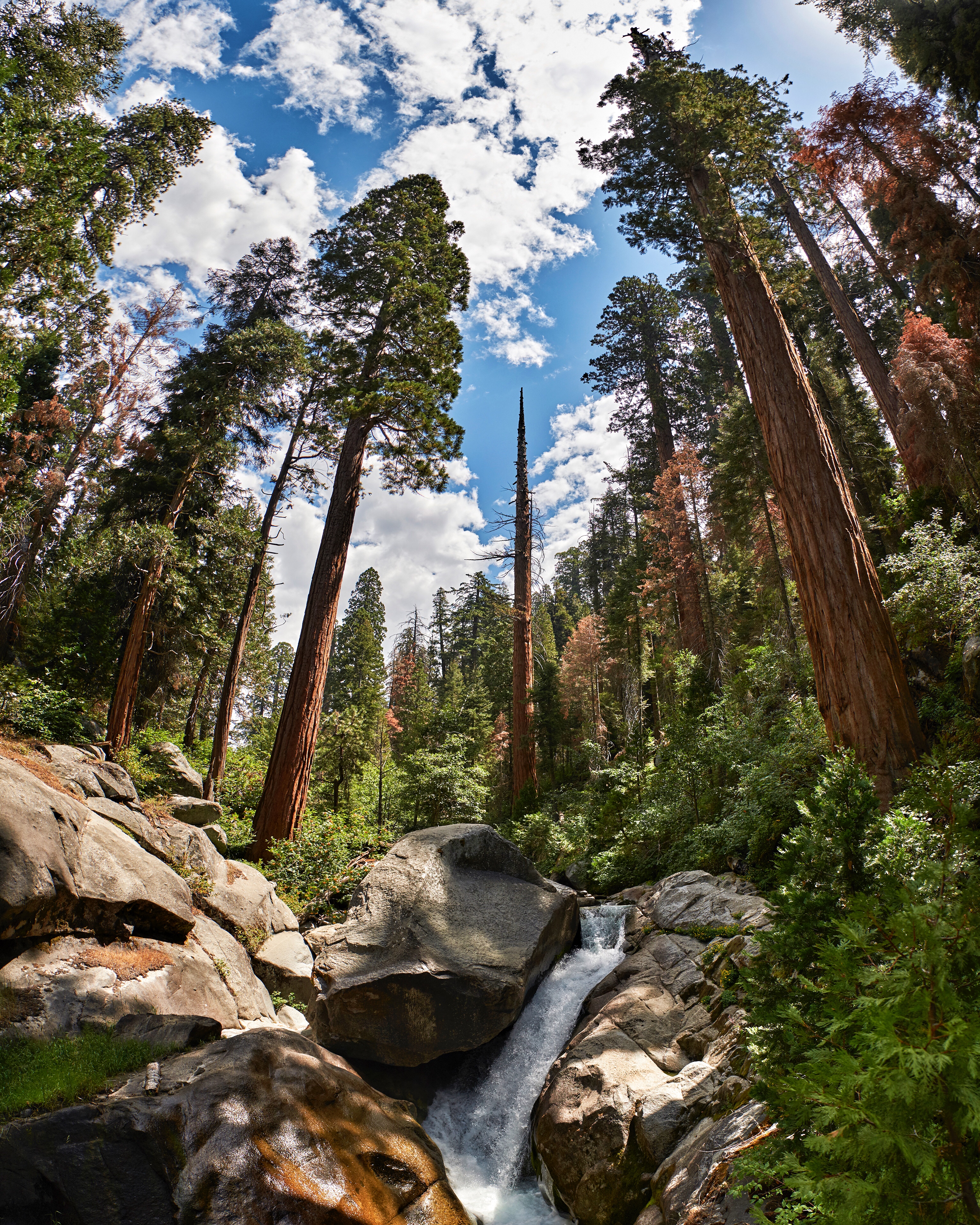 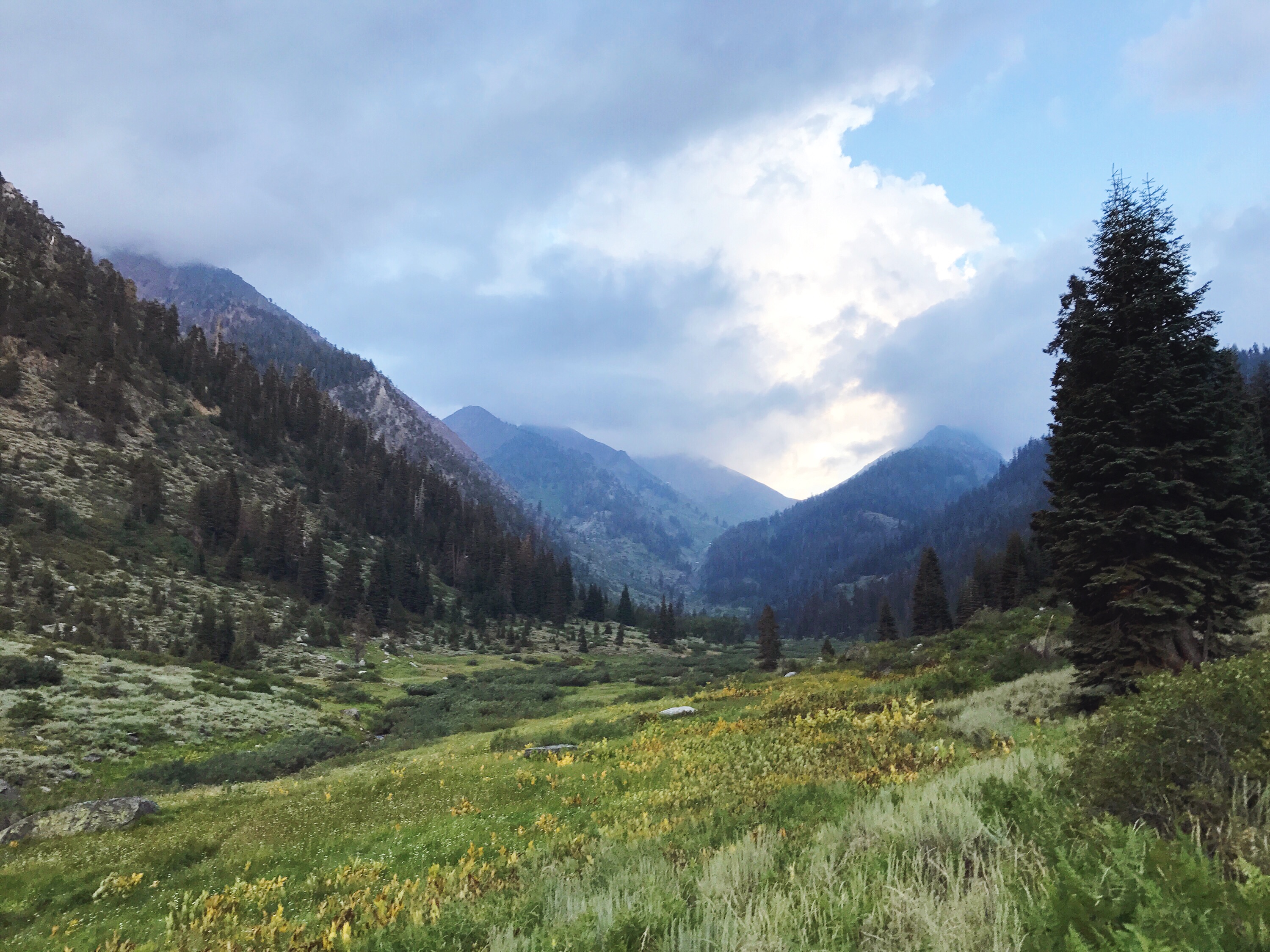 On the mountain directly next door to where the giant sequoias thrive is a subalpine glacial valley called Mineral King. Fun fact, Mineral King was adopted by Sequoia National Park in the 70’s when Disney tried to make a ski resort there. Locals and conservationists fought Disney for 7 years and eventually Disney lost; it was then that Mineral King became part of Sequoia National Park and today remains a protected piece of land.

Mineral King offers a similar myriad of stunning trails filled with stunning waterfalls, lakes, big trees, and scary wildlife. (Don’t worry, I didn’t actually see any bears/snakes/mountain lions, but I did see the 19358928209 warnings.) My friends and I hiked the Atwell-Hockett trail to catch a glimpse of a giant raging waterfall which ended up being about a 4 mile endeavor – in other words, a great easy to medium level hike. For a step above that, there’s a beautiful trail located at the top of the mountain aptly named Eagle Lake. (See reference photo above for stunning, peaceful, and still Eagle Lake.)

The most important distinction I think I can make between the trails in the Sequoia National Park and the ones in Mineral King, is that Mineral King has quite a bit less foot traffic. If you’d prefer to hike as though you’re the only one on the trail, Mineral King is the destination for you. 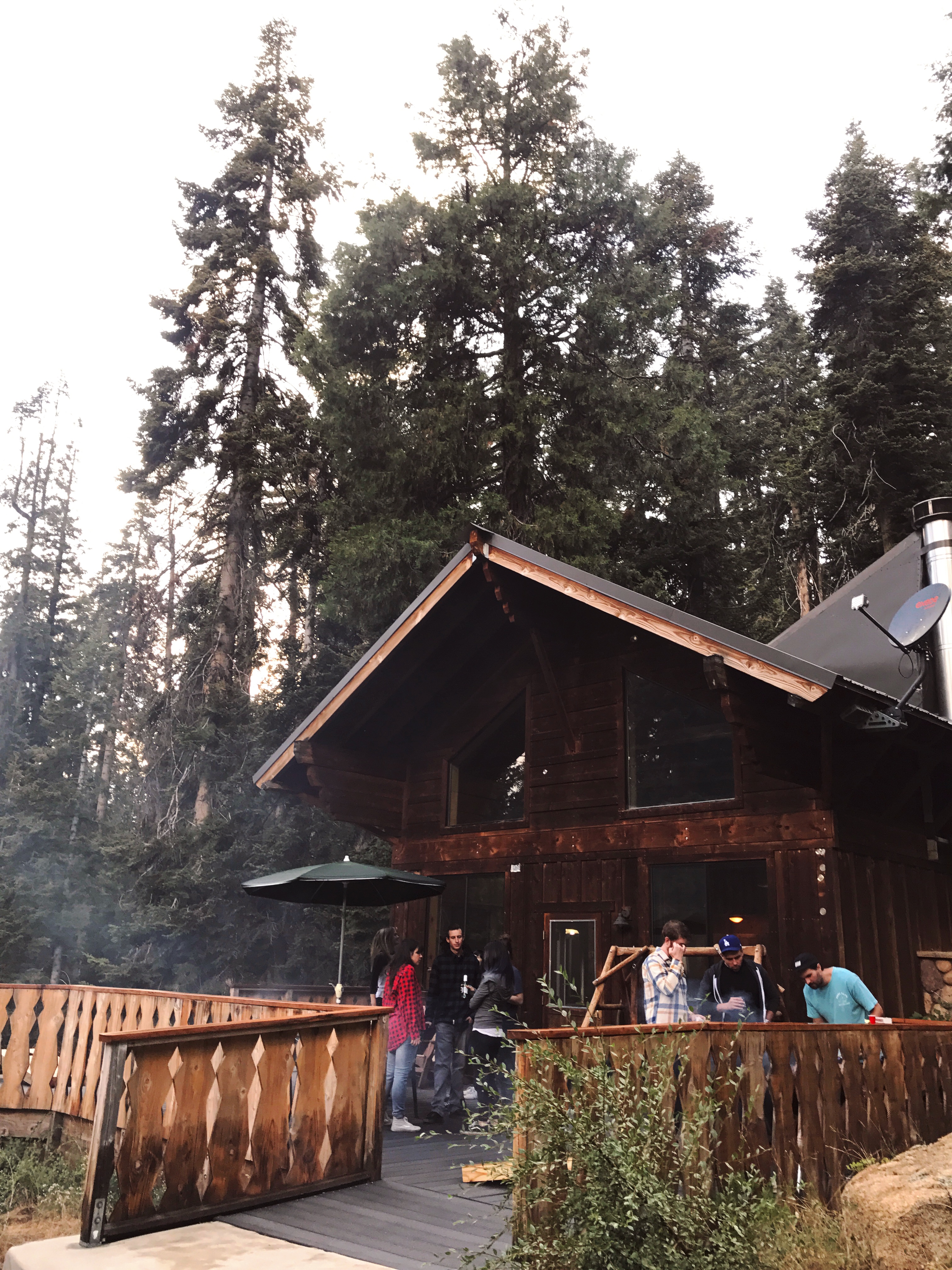 If you asked me what my favorite part about being in this beautiful National Park was, it would be staying at the absolutely adorable Silver City Mountain Resort. Silver City is located about 75-90 minutes (21 miles) within the Mineral King Valley, which is one of the most remote parts of the Sequoia National Park. This little historic hidden gem has been around almost a century and offers a small number of cozy cabins or chalets to shack up in. Silver City is one of the few places you can find in California where you can truly “go off the grid.” There’s no service that far up the mountain, there is wifi but you can only access it in one area of the resort, and most of the power is generated by the resort itself. It’s a strange yet welcome blessing to be forced to put away devices, read books, play games, talk to your friends/family/partners, and forget about the worries of the world. I thought I’d have a panic attack and that there would surely be some sort of 911 emergency, but to my surprise I haven’t felt that calm and at peace in quite some time. As we’ve established I am not one for sleeping directly outdoors, and even though Silver City is no 5 star luxury resort, it’s exactly what you need and want for the location. A little rustic, a little historic, a little country… it’s perfect. And the restaurant? – worth the drive alone! 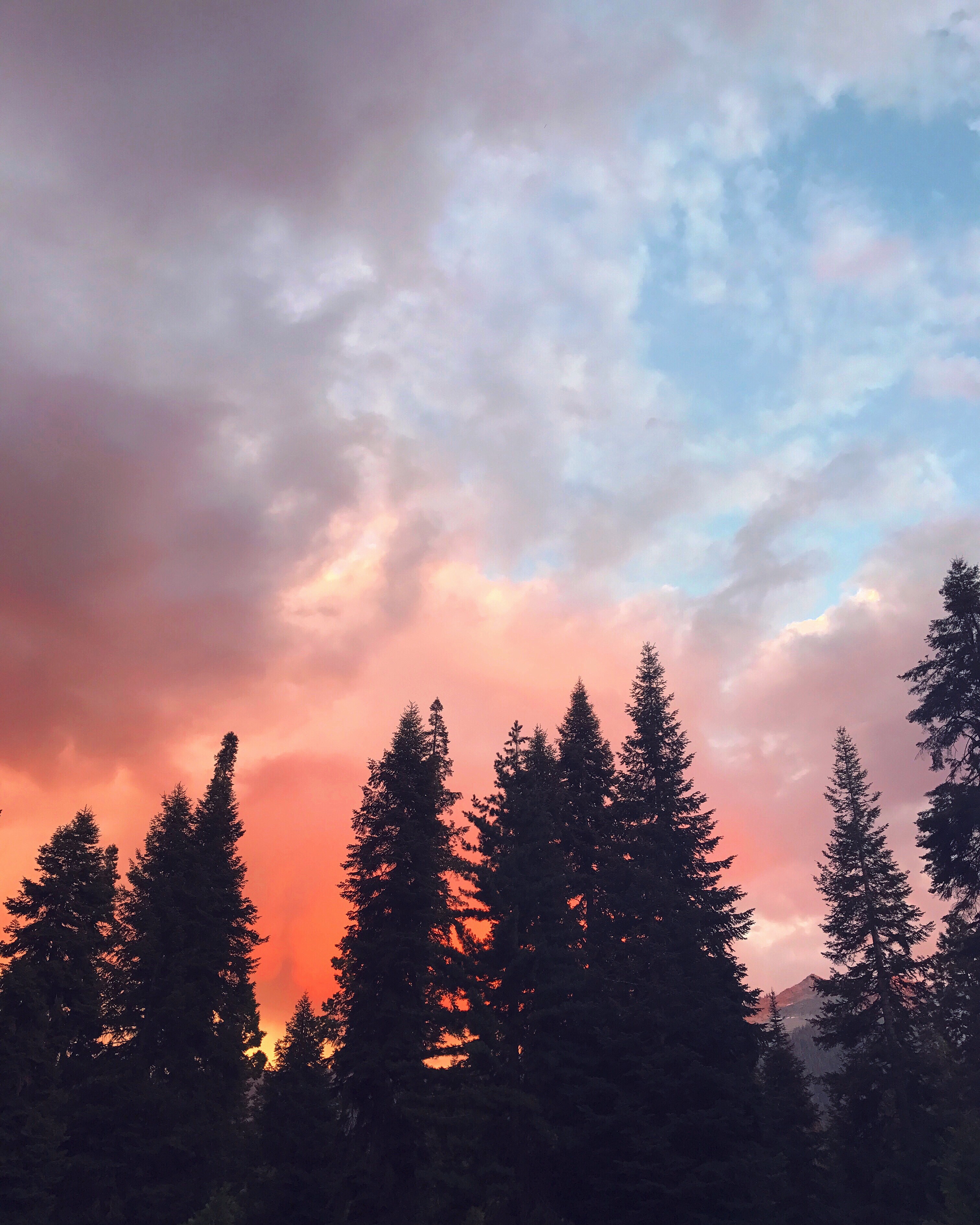 If you’re truly the type who loves stoking fires and sleeping under the stars, fortunately there are several camping grounds on both mountains to choose from. I cannot personally attest to the campgrounds around the Sequoia National Forest,  but HERE is a list of where you can tent up! In terms of campgrounds in the Mineral King area, I had friends stay in the Atwell Mill and the Cold Springs campgrounds and loved them both. Atwell Mill is lower down the mountain, and Cold Springs is a bit more remote as it’s located almost at the very top (almost 8,000 feet!). 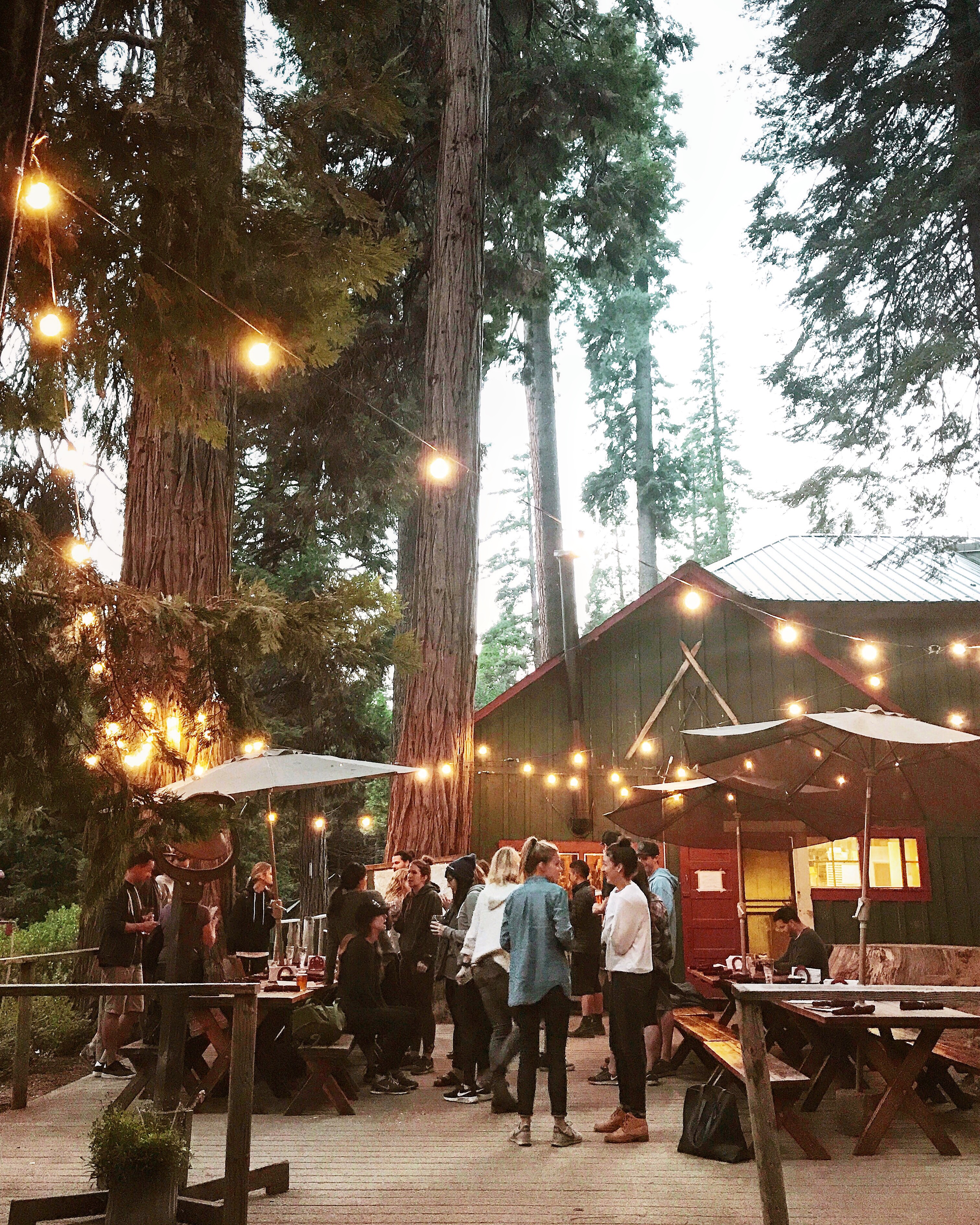 YEP! YOU BETCHA! Silver City is the premier place on the mountain for fresh pies and home cooked meals – all made with locally sourced ingredients. It’s not enough that the entire staff happens to be the kindest humans ever created, they also just so happen to be incredibly proficient in the kitchen. I’m not too big on cooking on vacation, so I actually had breakfast, lunch, and dinner at the cafe and could not rave more about what amazing meals all of them were. I’m getting hungry just thinking about the burger, eggplant parmesan, chocolate chip pancakes, French press coffee and warm slices of pie! 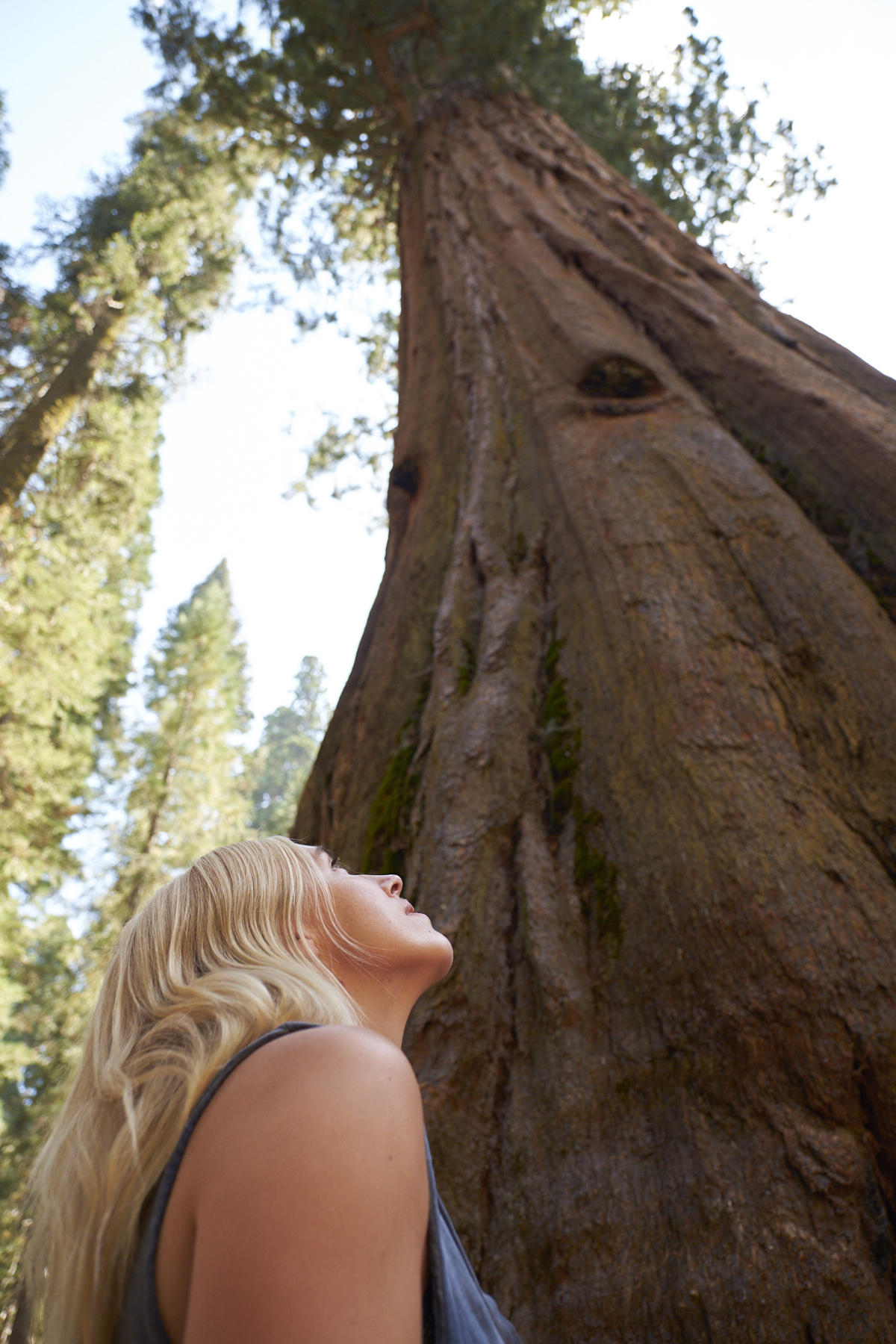 MOTION SICKNESS – If you are even slightly prone to motion sickness, I’m warning you now that the drive up and down these mountains are BRUTAL. The roads are small and easily the most winding I’ve ever experienced. The good news is though, I found the magic answer to our problems: they’re called Sea Bands. They’re simply tight bands you wear around your wrists that hit certain pressure points, and I am telling you now they work. I have one of the worst cases of motion sickness I’ve ever seen, I have a hard time even flying let alone just simply driving – and forget boats all together. But I wore these Sea Bands on the drive to the Park and by some miracle I didn’t feel sick at all. I don’t get it, this is absolutely not an ad or endorsement, I’m just letting you know that if your issue with visiting these parks might be the drive – worry no more.

ALTITUDE – it’s worth noting that the altitude in the Sequoia National Park can be anywhere between 1,000 – 10,000 ft. You’ll likely be somewhere in the middle most of the time, but if your prone to altitude sensitivity be sure to keep this in mind.

TIMING OF VISIT – it’s also worth noting that the best and really only times to visit the park are between May – October. Otherwise it can be tricky finding lodging and getting up and down the mountains in the snow.

TEVA – If you’re in the market for some of the best lightweight/ waterproof/ affordable/ fashionable hiking boots, Teva makes my absolute favorite pair. The ones I wear are called Arrowood, they come in 3 colors, and they’re just $160.

CAMERA – if you were going to invest in a camera ever, now would be the time because there is a TON to photograph. Whether it be the trees, the river, a waterfall, or the 100 billion bright stars in the Milky Way, The Sequoia National Park is one of the most beautiful places on earth. Forget your phone, bring the real deal. (Unless of course you have an iPhone 7 then ok, that works. I shot a lot with mine!)